A variety of tastings during the market portion including a sweet ending of fresh fruit sorbets. The class includes a delicious lunch of the dishes you’ll prepare.

*15% discount for groups of 4+ booking together – please use Contact Form to enquire.

Rachel

@rachela
Read More
Erin is an amazing tour guide and a wealth of knowledge when it comes to the city of Mérida. She introduced us to some indigenous fruits and vegetables! We tasted all types of fresh fruits while touring the market. My favorite spot was the spices!! If there Para Todo but both its the best with eggs! Our tour finishes with delicious fruity sorbet. Absolutely amazing and perfect for a hot Yucantán day

Angela
Read More
My husband and I had a great time walking with Erin through the stalls, meeting some regular vendors and sampling new foods. Its quite confusing to walk through by youself as we tried again a couple days later. Trust the expert!
Previous
Next 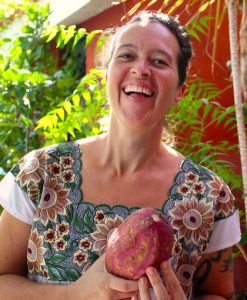 I was born and raised in the foodie Mecca of the San Francisco Bay Area, California, and am a certified Natural Chef with ten years experience in professional kitchens. What I most love about living in Merida is how integral food is to the culture and how willing locals are to share it with everyone who visits.

What are we going to do?

Despite the passage of centuries, the pre-Hispanic diet and traditional plant foods and preparations continue to play a large part in the daily diet of the Maya people. Whether you’re a traveler or a new resident in Merida, this is an essential exploration of fruits, vegetables and other plants of Yucatán.

From Parque San Juan, then through the bustling downtown, you’ll make your way to Merida’s central Lucas de Galvez market.

Learn about the significance of indigenous produce like chaya, camote, espolón and jícama, and taste foods typical to the region.

Expect to spend a lively three hours getting to know Merida through its vibrant food culture, while bumping elbows with locals in traditional Mayan dress.

…Add on a Cooking Class

Following the Fresh Market Tour, return to the kitchen at Casa Misterio for a 1.5 hr cooking session using our seasonal market finds.

Fusing Yucatán traditions and flavors with our own culinary references, we’ll create delicious, healthful dishes, and enjoy them together. Discover how you can adopt traditional preparations into your own cooking style and be inspired to integrate new ingredients into your own diet no matter where you live!

This class is vegan, vegetarian and omnivore friendly!

Custom tours available at other times/days

Any cookies that may not be particularly necessary for the website to function and is used specifically to collect user personal data via analytics, ads, other embedded contents are termed as non-necessary cookies. It is mandatory to procure user consent prior to running these cookies on your website.